Home > News >Akeance’s point of view > The establishment of mass teleworking, between rescue and shipwreck

The establishment of mass teleworking, between rescue and shipwreck 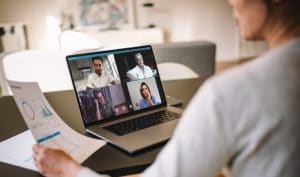 If the implementation of mass teleworking has been a success for our customers, ensuring ipso facto the continuity of their activities and our missions, the debate remains open as to maintaining it over time when questions of vaccination against Covid 19 are on all TV channels. 100% teleworking seems a panacea for maintaining activity during the Covid period among tertiary companies and support functions. A "sweet remedy" which must not become "workers' opium". But rather than wondering whether to maintain or ban this practice and see ourselves confronted with a “Norman response”, we ask ourselves the following question: beyond a traditional diptych, advantages and disadvantages of teleworking, what has its mass implementation transformed in the conceptual approach to work?

The introduction of mass teleworking has revealed latent benefits that are little expressed by employees and so far little recognized by managers: greater flexibility and greater freedom in the individual organization of work. Now, everyone can organize themselves a little more according to their desires and their own constraints (and can even extend their working time due to the disappearance of transport time).

Moreover, the mass establishment of teleworking has initiated a kind of revolution in the practice of consulting. Previously, a more holistic approach prevailed. A project, a study, a mission… for a team. We set up project platforms with multidisciplinary teams, thus cultivating emulation and value through the strength of the group. While the mass telework imposed in the Covid context has been successful in its implementation among most actors, its application has mechanically reversed the holistic approach to make way for a more individualistic approach to work. In fact, everyone works "in their own corner" and executes their to-do list. Despite greater efficiency in the execution of certain tasks such as those related to analysis and writing (individual tasks precisely), the emulation and value induced by the strength of the group is gradually being lost. So no more work for a team, make way for a sum of individuals work! Two major drawbacks are identified: the disappearance of group gratification as well as a "professional dehumanization" which prevents the sharing of emotions between team members. These disadvantages, in a situation of 100% telework, are metamorphosed into human malaise.

With the reduction in face-to-face work like a pain, leaders and managers have understood these risks and sometimes try to alleviate them with a new meeting format, “sharing meetings”. Unfortunately, these sharing meetings rather become the forum for resolving a sum of bilateral problems poorly camouflaged by the desire to share information. Thus, one can find oneself confronted with a multiplication of group meetings to deal with individual subjects and not subjects related to the project. Hence the emergence of feelings of team frustration, waste of time and efficiency. We see each other without seeing each other, we work as a team without forming a group. In short, hell is paved with good intentions ...

That being said, you'll be tempted to ask us, "How do you do at Akeance?" ". We have chosen to mix the two forms of proximity. The typical week is organized around the assignment of a team / client on only two days per week in person. Thus, the teams meet each other physically (while respecting barrier gestures) without causing an excessive influx of staff into the staff rooms and meeting rooms. A weekly fifteen minute point allows us to share the good news of the week. This avoids falling into the trap of "the tongue of Aesop". Telecommuting for better or for worse… it would be good to keep only the best!

Nice summer! And get vaccinated! Lire plus
Telework and dematerialization Lire plus
Under the Tuscan sun Lire plus