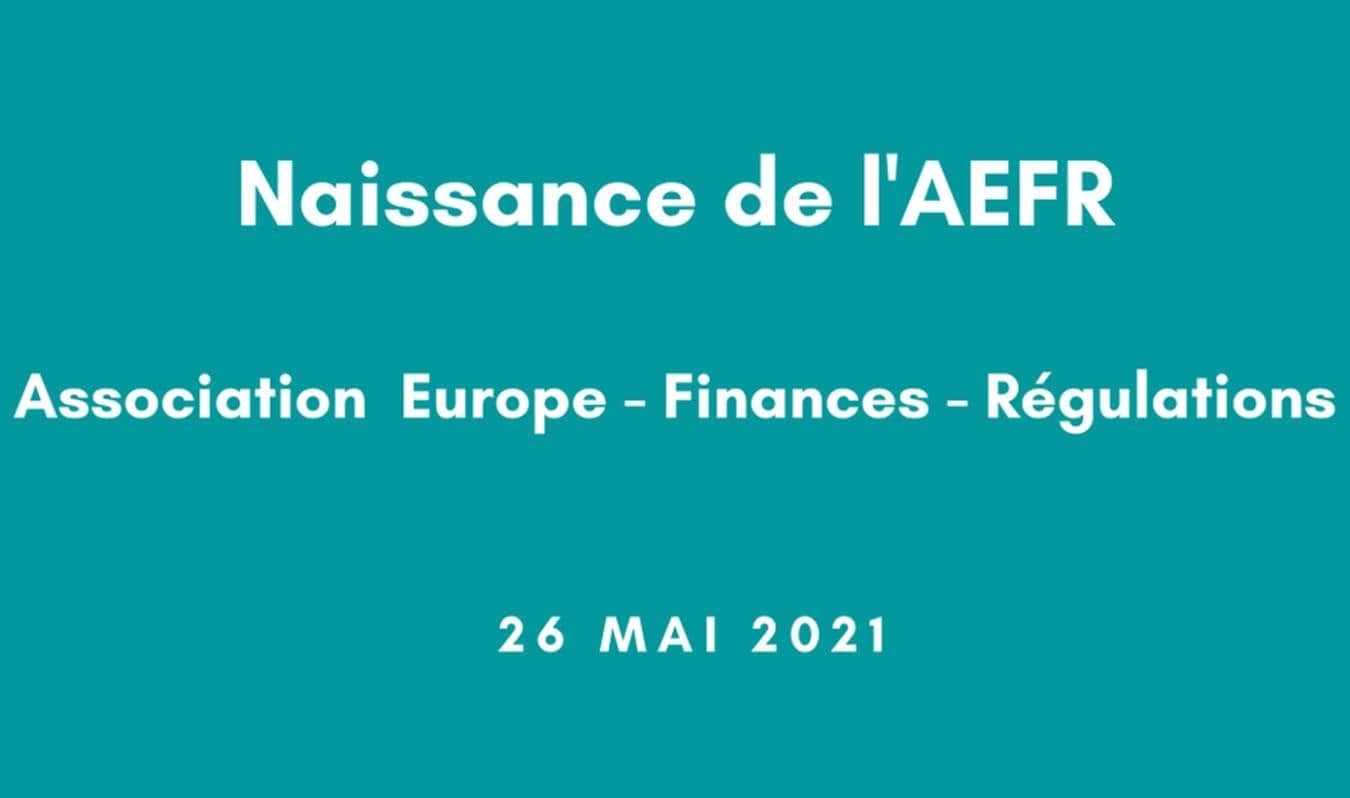 40 institutions and firms have decided to join the Association Europe – Finances – Régulations (AEFR), a think tank and cross-sectoral body with a focus on thinking and exchanges of views on matters of the financial regulation. Its object is to put forward, within the European framework, proposals on the evolution of the regulation or the organization of financial markets in order to assert views on ‘Europe as 27’, at a European or international level. While financial Europe is seen as an essential vector for the development of the European economy post-COVID, the AEFR intends to strengthen its capacity for thinking on regulation, on an inclusive and representative basis, within the combined context of the Green Deal and the digital revolution. The AEFR will also seek to contribute , via leading-edge regulation and organization, to European influence in tomorrow’s world as international competition has intensified considerably in recent years.

On the one hand, this initiative is the result of the merging of two associations, the AEF (Association d’Economie Financière) and the EIFR (European Institute of Financial Regulation),whose respective chairs convened their general meetings on 26 May 2021 in order to endorse the AEFR’s establishment and, on the other, of the admission of 10 new members. The association has the support of the AMF, the Banque de France, Paris EUROPLACE and the Direction Générale du Trésor.

The AEF and EIFR’s members wished to join forces in order to carry out joint action which would develop their respective complementary nature and synergies, whilst capitalizing on and bringing together their core assets : namely, the EIFR’s 12 years of experience of legitimately bringing regulators and financial market professionals together for meetings, recognized for the quality of debate, with the aim of promoting balanced regulation ; and the AEF’s ability to produce and circulate an authoritative university review for over 30 years, based on a unique model of teams composed of regulators, academics and industry professionals to focus on subjects related to financial economics in the broad sense: the Revue d’Economie Financière (REF).

Chaired by Pervenche Berès, a EuroMP from 1994 to 2019, former Chair of the European Parliamentary Committee on Economic and Monetary Affairs and firmly committed to matters concerning financial regulation, the AEFR aims to be :

- A tool for the production of debate papers, for opening or broadening debates by progressively forming a basis for thinking on current or emerging issues involving financial regulation, the organization of financial services in post-Brexit Europe and of ecological transition, and more generally, the development of financial services in Europe and globally ; - A center of expertise in the field of financial regulation, by developing the EIFR’s organization of meetings on regulatory matters, bringing together the combined expertise of regulators, regulated financial firms and partner organizations ;

- A forum for discussion between institutions and member firms on core financial developments and sectoral challenges, notably brought to light in debate papers via regular meetings of AEFR members : meetings held by the AEFR under the Chatham House rule ;

- As well as being the publisher of the REF, which today enjoys recognition for its reputation and authority ; a growing readership ; broad contribution from France and abroad, from university academics, regulators and industry professionals ; as well as enjoying self-governance by its Steering Committee which is chaired by the Governor of the Banque de France.

Robert Ophèle, Chairman of the AMF, said: « We welcome the forming of an ambitious tool to lend a strong voice to debate –a matter of paramount importance for the French and European financial market place - on regulatory challenges and the development of the financial industry».

Jean Cheval added: « It is as remarkable as it is essential that this new structure brings together key players in the field of banking, insurance and asset management, their regulators, as well as service providers (lawyers and consultants) and these sectors’ clients (non-financial firms), in order to rally all the necessary fields of competence for crucial thinking on the competitive financing of the European economy within a sustainable environment».

Pervenche Berès concluded: «The AEFR has drawn up an ambitious program of thinking, debate and proposals to build a robust and efficient post-Brexit financial Europe, based upon relevant and balanced regulation, in order to spur the development of enterprises and the economy in Europe. This solid base of financial market players forms a pledge of requirement and openness. Its membership can be further strengthened by welcoming other future members, so as to provide even broader coverage of subjects of financial regulation in Europe ».

Nice summer! And get vaccinated! Lire plus
Telework and dematerialization Lire plus
Under the Tuscan sun Lire plus

GDPR: the banking sector must improve its compliance Read more
The solidarity barrel Read more
Akeance Consulting is proud to be a member of AEFR Read more
Top